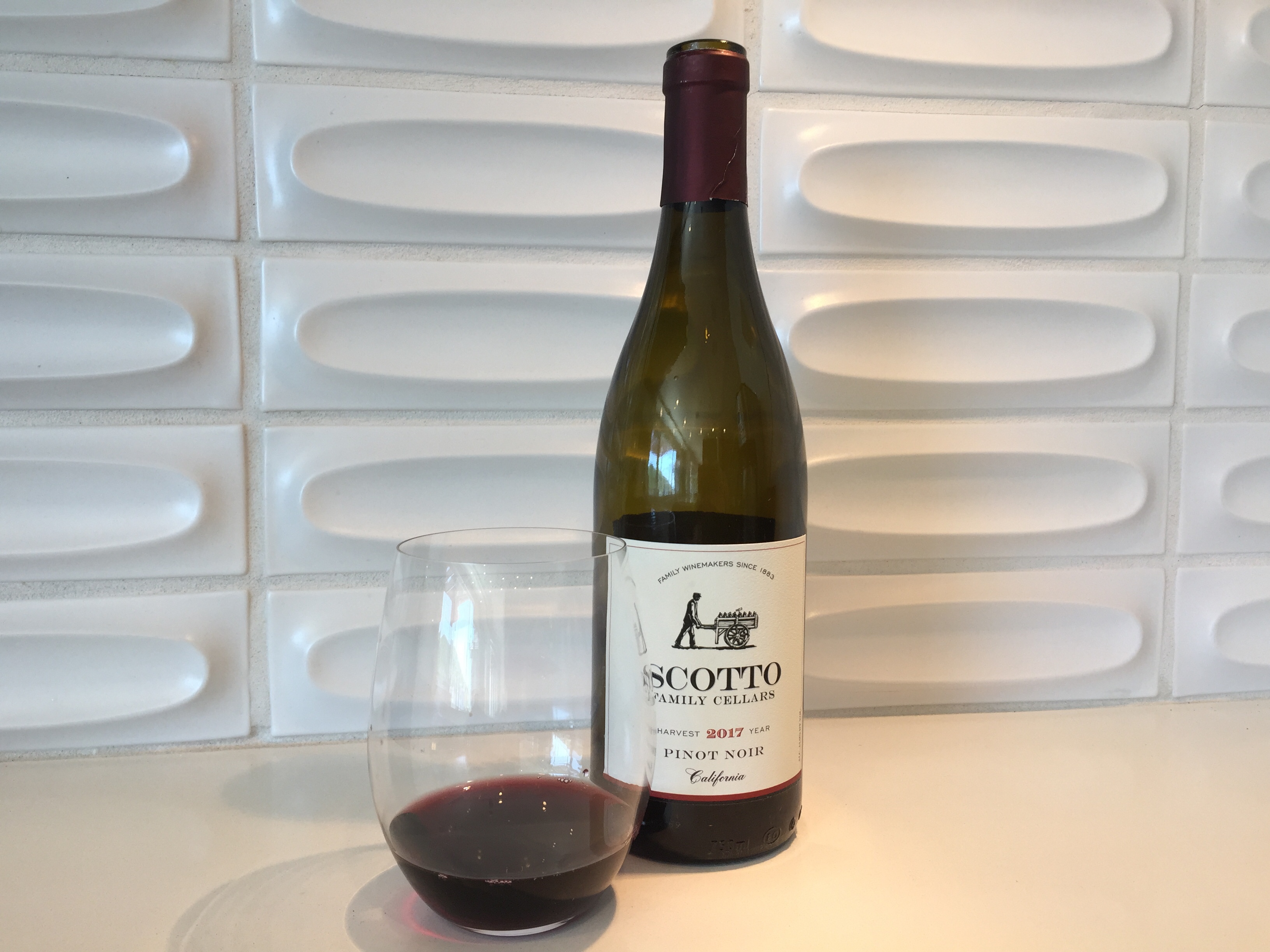 I trust this dispatch finds you and your loved ones healthy, and “sheltering in place” (S.I.P.) with some good wines. (Sipping while SIPping anyone?)

Maybe with all the extra time we have to watch old favorite TV shows and films, some of you have circled back to the excellent film Sideways.

The movie Sideways catapulted California Pinot Noir to stardom.  Since its release in 2004, Pinot Noir production has grown by a whopping 81%. If you are not familiar with the film (or its effect on sales of Merlot) you could brush up on its backstory by checking out our post here.

But enough about Merlot, let’s talk about this Pinot Noir.

You may recognize the label, as it is a dead ringer for the Scotto Family Cellars Zinfandel we reviewed just a month ago – and which now feels like a year ago.

Normally, I might this have passed over this bottle. As I have freely admitted in the past, I tend to dismiss wines that only carry the California designation.  But I thought it was worth a shot since we liked the winery’s aforementioned Zinfandel, although that particular wine featured the a higher designation, specifically California’s Lodi region.

This particular wine is almost certainly composed of fruit from warmer weather vineyards (like Lodi) here in the Golden State.  But we can only guess.  When wine only carries the lesser California designation, it masks where the grapes were grown. Bottlings of richer Pinot Noir tend to exhibit more dark fruit flavors. In general, they are fuller wines with greater concentration and higher alcohol than Pinots from cooler regions.

Initial aromas had a bit of mustiness that made me think there might be some Lodi fruit in the blend. The wine sits soft on the palate and is a pleasure to drink. It featured flavors of bright red cherries, spiced plums and vanilla.

This is a wine that benefits from decanting for a spell before enjoying.  This allowed the mustiness to blow off and also let the wine’s fruit flavors to emerge. 30-45 minutes of “air time” did the trick and the wine continued to impress a day or two after opening.

Since the law allows as much as 15% of another grape to be in the blend, there could be a big dollop of Syrah or Zinfandel in the mix here.  That would help explain its opaqueness and dark fruit flavors.

An interesting side note: In Pursuit of Balance (IPOB) is a thriving group of wine producers founded on the notion that California Pinot Noir should be balanced, rather than decadent and lush—the prevailing style over the past few decades. It’s a noble pursuit for sure, but something tells me that they would not approve of this style.

That said, we’re curious what you think about this heavier style of Pinot Noir and look forward to your comments on this post or those on our Facebook and Instagram pages.