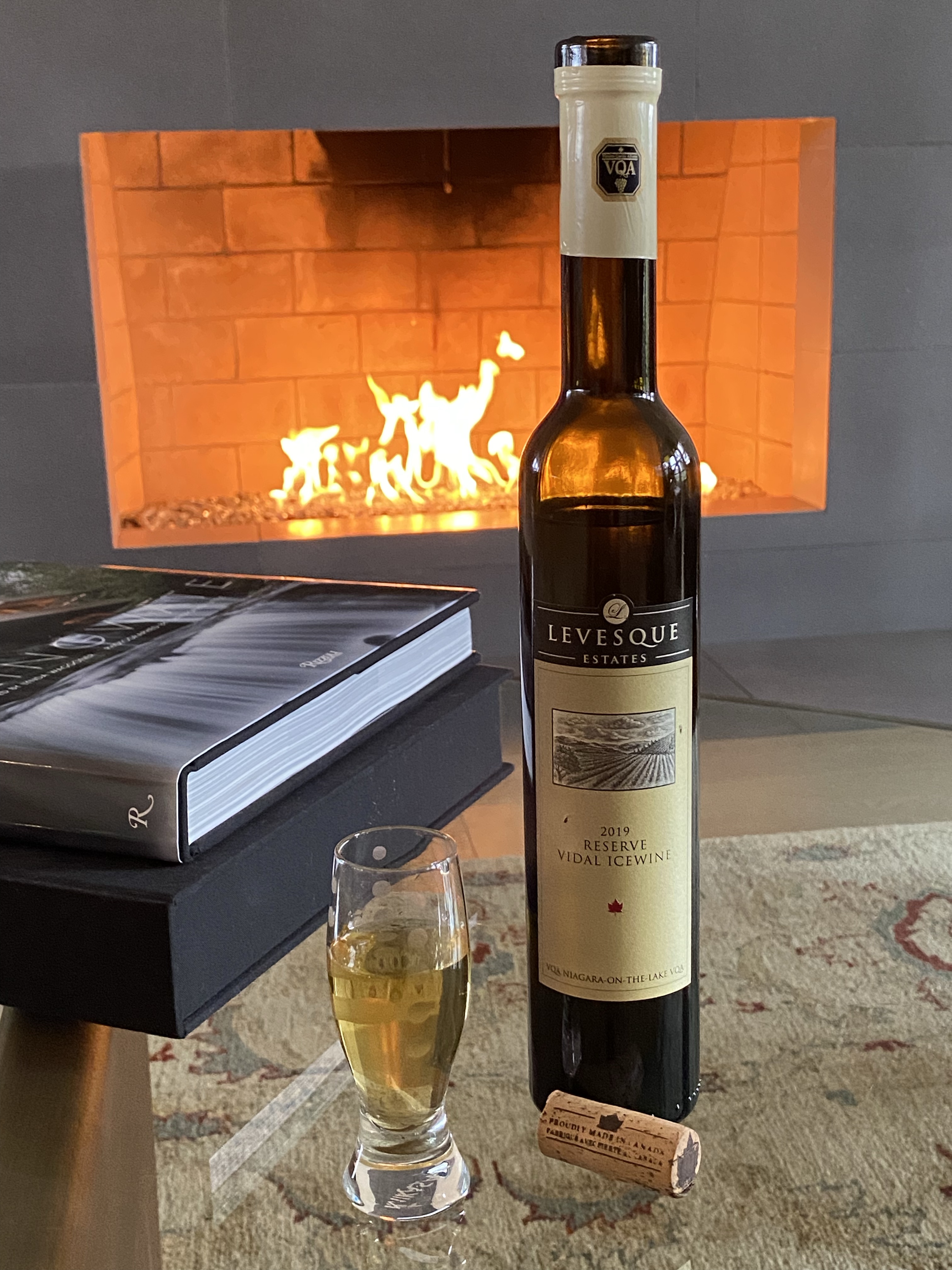 You may be surprised to learn that Icewine (the anglicanization of the German Eiswein) is the most famous wine produced in Canada. Heck, for all I know, you might be surprised to hear that Canada produces wine at all. (Give it time, climate change may help Canada produce Cabernet Sauvignon that tastes like it came from Napa in a few short decades.)But speaking of surprises, I was surprised to discover this Canadian Icewine tucked in next to the Chardonnay at my local Trader Joe’s last week.  If you have never tried Icewine, you’re in for a sticky sweet treat.  And if you have purchased Icewine in the past, you’ll be pleased to know that at $14.99 (for a 375ml half-bottlel) this brand from Traders sells for a third of the price of the brands that are the more ‘famous” ice wines from this region.

Lovely golden color in the glass, as shown above. The nose has aromatics of tropical fruit including mango and orange. On the palate fruit flavors including peach, nectarine and lemon balanced by crisp, lively acidity. Perfect on its own, it would also pair really well with a variety of cheeses (blue veined, aged cheddar, rich cream cheeses served with marcona almonds and dried fruits), seared scallops, lobster, rich pates, and fruit based desserts.  Tastes like boozy apple juice, and that can’t be bad!

As a generalization, most American’s know far less about dessert wines than they do still, table wines.  So here is a quick primer:

In general terms, there are two types of dessert wines: fortified wines and those that are not fortified.  Since “adult beverages” are made by yeast (all hail yeast!) converting starches and sugars into alcohol, if there is sugar left behind, the producer can either leave it as a sweet, low alcohol elixir, or add neutral grain spirits to jack the alcohol level up to that of table wine and beyond.  This featured Ice Wine (unfortified) is just 10.25% alcohol. Port wines on the other hand, ARE fortified and can clock in around 20% alcohol by volume (ABV).

Sweet wines are sometimes made by extracting water from the wine. In other cases, they are the result of arresting the fermentation process before the yeast has converted all of the sugars to alcohol.  Some of the most famous wines in the world are sweet, but they do not all become sweet the same way!

In the case of the French wine Sauternes (among the priciest sweet juice) the concentration of the wine is the result of a fungus (Botrytis cinerra, if you must know, or what is referred to as “Noble Rot”) that attacks the grapes very late in the growing season, and causes the (over) ripe grapes to weep and shrivel.  The most famous Sauternes, which is unfortified, comes from the estate Chateau d’Yquem, south of Bordeaux.

Another very famous sweet wine is Port, which derives its name from the city of Oporto, the second largest city in Portugal, and one of our favorite wine destinations in the world. In this case, the wine is fortified with grape spirit (which is 77% ABV on its own) which serves to kill the yeast, stop the fermentation, the retain the sweetness of the unfermented wine.

In the case of Icewine, or Eiswein, the ripe grapes are left in the vineyard and subjected to freezing temperatures, which serves to freeze the water in the grapes. The grapes are then quickly pressed before the ice crystals melt, thus concentrating the flavors of the grapes sans much of their water content.

Three sweet wines, with three different methods of production, all resulting in delightfully delicious wines to enjoyed in small sips.

If your trap line leads you to Trader Joe’s anytime soon, keep an eye out for the one and only ice wine they stock.  Also take along our cheat sheet: the Lucky 13 list of TJ’s wine.

If you’re headed to Costco soon, you can find our most recent reviews of Costco wines here in our other Lucky 13 list.

1 thought on “Some January Ice (Wine) for Your Enjoyment”