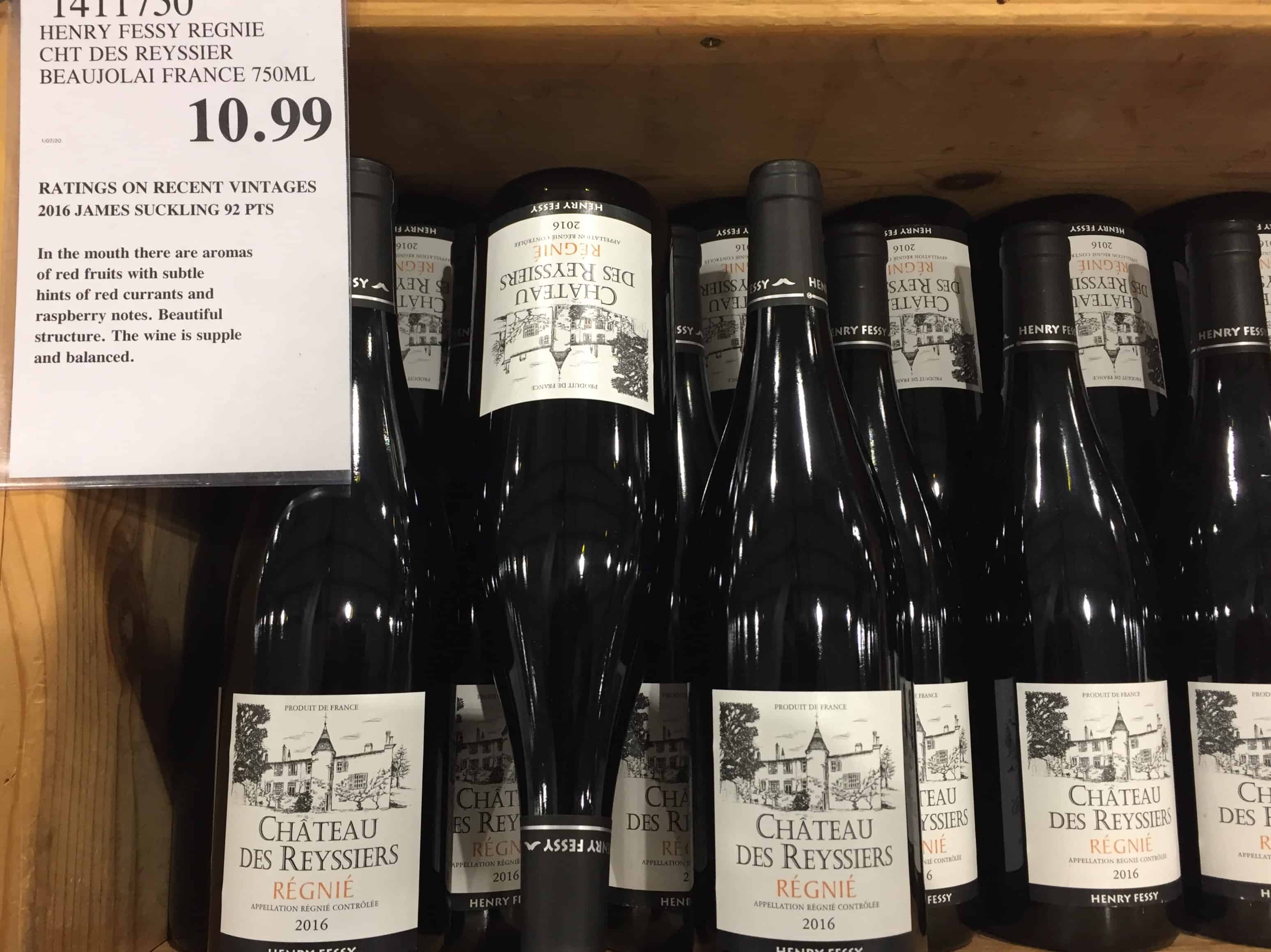 Pack your bags, Costco is sending us to France! Beaujolais to be precise…

Beaujolais, which lies between Burgundy “proper” in the North and gastronomic capital Lyon in the South, is one of France’s most outstanding and unique wine regions.

But unlike most wine regions in France and the rest of the world, virtually the entirety of Beaujolais’ red wine production relies upon a single grape variety: Gamay Noir.  As with the more famous (and expensive) red wines from neighboring Burgundy, the wines from this region are light, juicy and with an appealing acidity.

Unfortunately, most Americans are only familiar with the young, fresh new wines released each November as so-called Beaujolais Nouveau.  But these embryonic wines (released just a few months after harvest) are only half the story of this historic region. Wines like this one from Henry Fessy are from the more “serious” side of Beaujolais.  As shown on the map below, within a short 10 mile stretch of hillside we find Beaujolais’ famous ‘Crus’ – the 10 villages which produce the region’s finest wines, each with a unique expression of terroir and style.

As seen above, the ten distinct communes are St-Amour, Juliénas, Chénas, Moulin-à-Vent, Fleurie, Chiroubles, Morgon, Regnié, Brouilly, and Côte de Brouilly. Any cru Beajolais will have its commune name prominent on the label, as is the case with this bottling from Henry Fessy, shown below:

Château des Reyssiers 2016 is an intense ruby color that hints of purple. In the glass, it looks like Pinot Noir.  In the mouth, there are flavors of fresh red fruits such as red currant and raspberry. There are also subtle hints of more savory notes which reflect the terroir of the region. Critic James Suckling awarded it 92 points, commenting: “A bright and salty wine with granite and firm austerity. Medium body, dusty and light tannins and a long, light austere finish.”

This is the first time we have reviewed a wine from Beaujolais (although just last week we reviewed this really nice French red from Bordeaux)  and something tells me it won’t be the last.

I predict a “perfect storm’ of conditions that will lead to a new era of wines with extraordinarily high qualty to price ratios. Long time readers will know how much we love high QPR wines, it is after all our raison d’etre. Here are the factors:

In short, it is a buyer’s market for bulk fine wine.  This is not necessarily good news for wine makers and grape growers, but it is a fabulous trend for wine consumers. There’s no telling how long this trend will last (as things are driven largely by weather the world over) but wines like this $9.99 Merlot from a small Napa appellation are likely a harbinger of good things to come.  Yay!

About this wine and its appellation:

The Oakville AVA (American Viticultural Area) is located within the larger Napa Valley AVA.  It extends over a flat expanse of Napa’s “valley floor” between the Vaca and Mayacamas Mountains. The Oakville AVA is known for its success with Bordeaux varietals which produce wines of rich texture, and firm tannins.  There are over 50 wineries located within, or source their grapes from vineyards in, the Oakville AVA. Many are small, boutique wineries (like Harlan Estate and Screaming Eagle) with limited production and astronomic prices.

Tasting notes:This is a medium weight wine with nicely balanced acidity.  I really liked the nose, and found it more reminiscent of the Merlots of Bordeaux than California.  Nice fruit flavors of plums, dried cherries, oak, vanilla, and mocha. There’s even some Napa dust is in there, which is not entirely surprising since the Oakville AVA is adjacent to Rutherford which has built an entire brand identity around the “dustiness” (it’s a good thing, trust me) of their wines.

This is a really, really nice wine for the price.  Good for everyday drinking and for enjoying with food. This would pair really nicely with salmon grilled with a light dusting of brown sugar.

You can read more about California Merlot and the movie Sideways in this prior post of ours.

Given the lack of online reviews (other than this one, of course) I am thinking that this wine is not widely distributed yet in the Trader Joe’s ecosystem. If you are lucky enough to find a bottle, comment here or on our Facebook page to let us know what you thought.