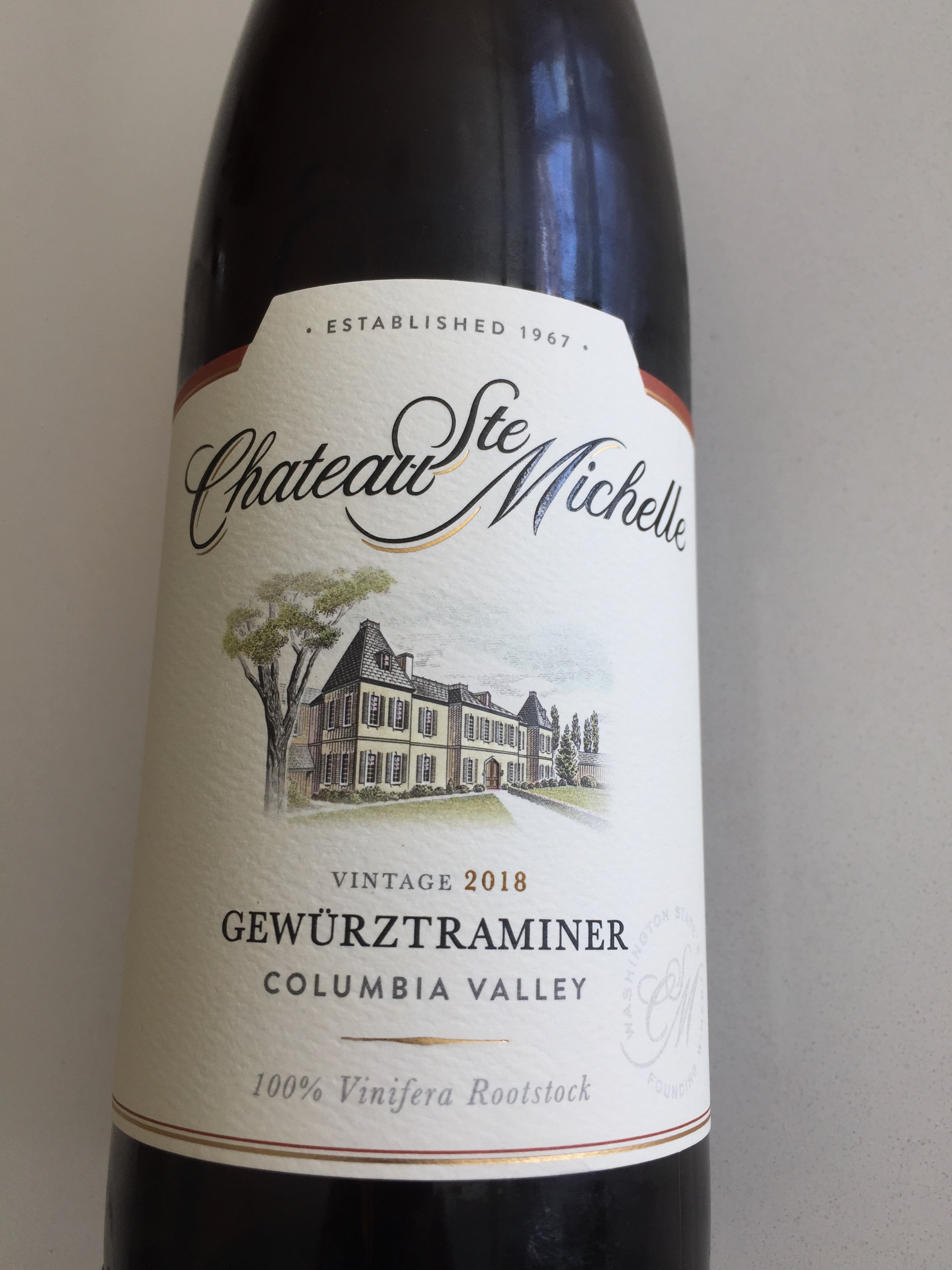 I often get asked: “how do you decide which wines get reviewed in your weekly post?”  In the midst of all the chaos of the past several weeks, the answer has, shall we say, mutated some. Here are the top six reasons why I decided to go with this one.

This is a lush, opulent style of Gewürztraminer with an intense floral character.  At first whiff, I got aromas of wet stone. I had to swirl and burrow a bit to get it to reveal its nose of orchard and tropical fruits.  It’s fruity, but not too fruity, sweet (demi-sec) without being cloying.  It’s a mouthful of honeyed fruit flavors of apples, ripe pear and a melange of tropical fruits, especially guava. Crafted from cool weather fruit, it has a natural crisp acidity to counter balance its residual sugar. It finishes with a nice note of citrus and allspice.

One of the best reasons to get familiar with Gewürztraminer (aside from its equally yummy $7.99 price) is that it is a remarkably versatile food wine that pairs well with hard to pair spicy cuisines like middle eastern, Thai, Indian and Chinese dishes.  It would also be good with duck, chicken and even bacon. I first discovered “Gewurtz” decades ago when visiting California’s Buena Vista winery and they recommend pairing it with the traditional Thanksgiving meal, which informed this blog post from last autumn.

We are also revisiting Washington’s Columbia Valley which was featured in this recent review of a red wine from the region.

One of the more curious things about the wines of Chateau Ste. Michelle is the proud proclamation that the wines are from vineyards planted on “100% Vinifera Rootstock.”  Like it sounds, that’s the part of the vine that is below the ground, and you all would be forgiven if you were not familiar at all with the significance of this fact.

Let’s Geek Out and Talk About Phylloxera:

Phylloxera is a root-sapping aphid that can be – and has been – devastating to vineyards. Even that may be an understatement as it has probably done more damage to vineyards than any other vine pest or disease in history.

Since we are all becoming expert on epidemics of late, you may find it interesting that America exported this louse to Europe where it proceeded to decimate European vineyards in the 1800s.  After wiping out some 6.2 million acres of grapevines, the very existence of the French wine industry was threatened.

Phylloxera is attracted to certain grapevines (such as Vitis vinifera, the species of most wine grapes, including those in France) but not other rootstocks.  The solution therefore is to transplant young vinifera vines onto disease-resistant rootstock – a process known as grafting.

Most grapevines in the world today are grafted onto phylloxera-resistant rootstock, much of which originally came from the United States.  So after infecting Europe, it was America to the rescue!  (Cue the conspiracy theorists!)

It’s rare, but some vineyards survived phylloxera, while other regions were spared due to their remote locations or other geographical extremes. Which brings us back to the front label of bottles from Chateau Ste. Michelle winery.  How is it that their vitis vinifera vines have not succumbed to phylloxera?  Seems that Columbia Valley’s dry summers and chilly winters make the region phylloxera-resistant.

Some think having the rootstock match the vines confers benefits on the fruit.  Winemaker Bob Bertheau of Chateau Ste. Michelle is of the opinion “having vines on their own roots helps…maintain the health and longevity of our vineyards and preserves the grape variety in its natural state, with no influence from the grafted roots.”

It is an unsettled argument, but suffice it to say that many winemakers believe that grapes grown on original rootstock will be more intense and flavorful, and could have a longer life than their grafted counterparts.

All I know is that if this wine is any indication, I am siding with Chateau Ste. Michelle on this one.

1 thought on “A wine to pair with an epidemic? Trader Joe’s has that too!”