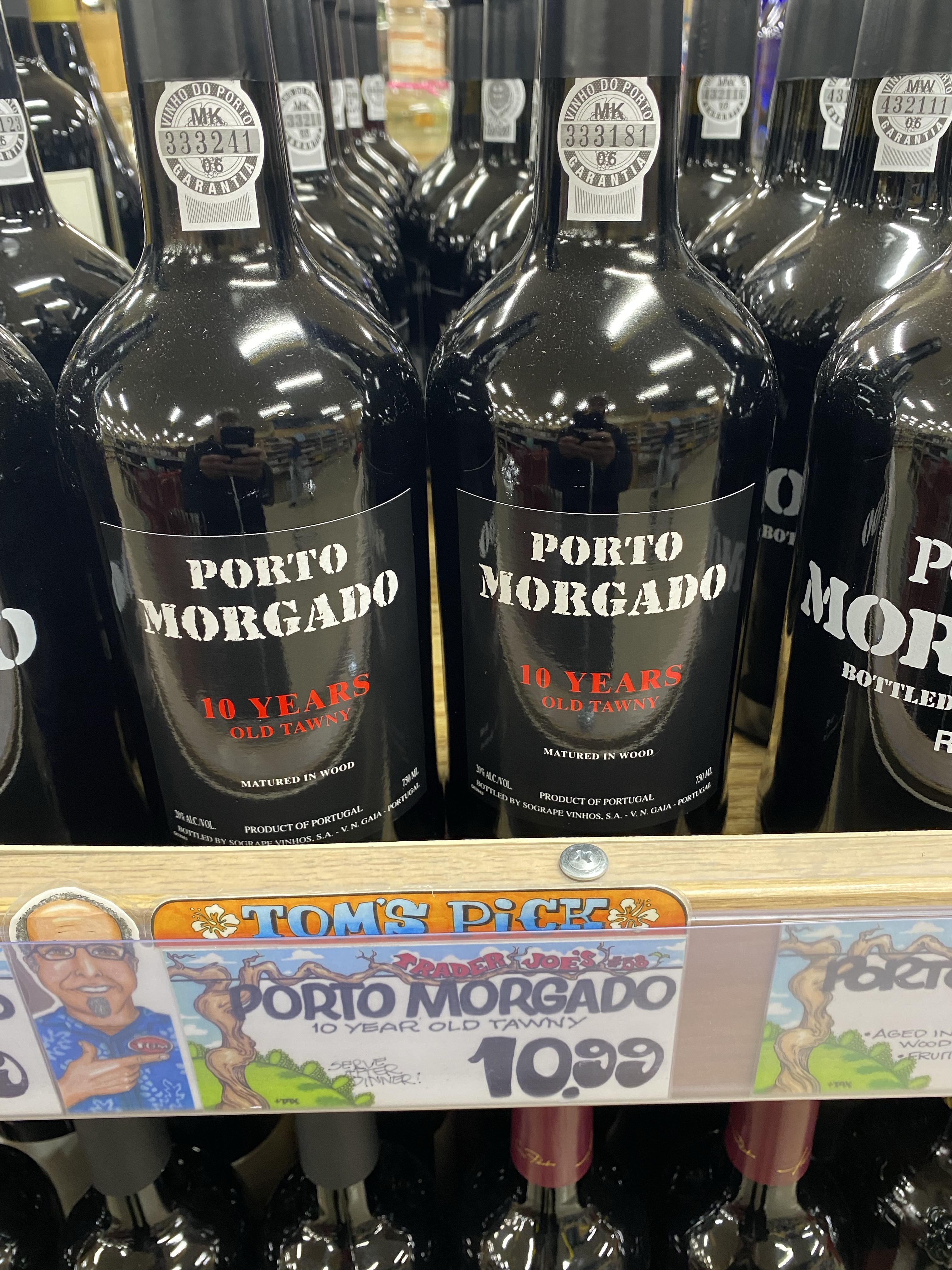 Hard to believe (at least to me) that this is our final post in advance of the 2022 Thanksgiving holiday.  Some of you may still find yourself at your local Trader Joe’s as part of your preparations for your celebration, and this wine is a treat to serve with the dessert course on the big day.  It’s also a good wine to buy for the other upcoming holidays, and cold winter evenings for that matter.

Pours a lovely brownish red, lighter colored than some Tawnies. Subtle nose, with pretty notes of cherries, raisins, prunes, almonds and wood. On the palate one gets wood, caramel, eucalyptus and spice cake. It sort of tastes like pecan pie in a glass.  I like Tawnies to be sweet, but not cloying. The Sandeman 20-year old – $44.99 at Costco – is a favorite in our house. While this 10 year old is not quite as polished, it is a fraction of the price. I think this Morgado strikes a nice balance and is a real bargain for what you get. It would pair well with most traditional desserts and hard cheese trays.

I can’t imagine a holiday season without the warming comforts of Port by the fireplace. But many American wine drinkers simply don’t think to keep a bottle on hand.  One of the reasons keeping a bottle – or two – on hand is a good idea is that unlike table wines, port lasts really well once opened. In fact, this knack for self-preservation is reason that port exists!  Let me explain…

Typically, red table wines are fermented dry, meaning that virtually all the sugars in the grapes are converted to alcohol. In the case of wine destined to be port, the red grapes only go through a few days of fermentation before neutral grape spirits are added to the batch. The spirits raise the alcohol level to a point where natural fermentation stops, resulting in a wine that is high in alcohol – and sweet, because most of the sugars remain in the wine.  This is why port is both sweet and high in alcohol, whereas table wines are usually one of the other.  (Note, this Porto Morgado clocks in a 20% alcohol, whereas most table wines are around 15%.)

There are many Port-style wines out there, but true port only comes from Portugal. The youngest of these are Ruby Ports. At the other end of the spectrum are vintage ports, which like most wines, are associated with the year in which they are harvested. These are typically the most costly ports. In the middle you have the Tawnies which are usually labeled with the average number of years it has aged. For example, a bottle labeled as “10 year Tawny Port” is made from wine that has been aging in a cask – on average – for 10 years. Some casks are potentially older or younger.  Tawny Port without an age on the label is likely a blend of red and white Port, which adds complexity and flavor.