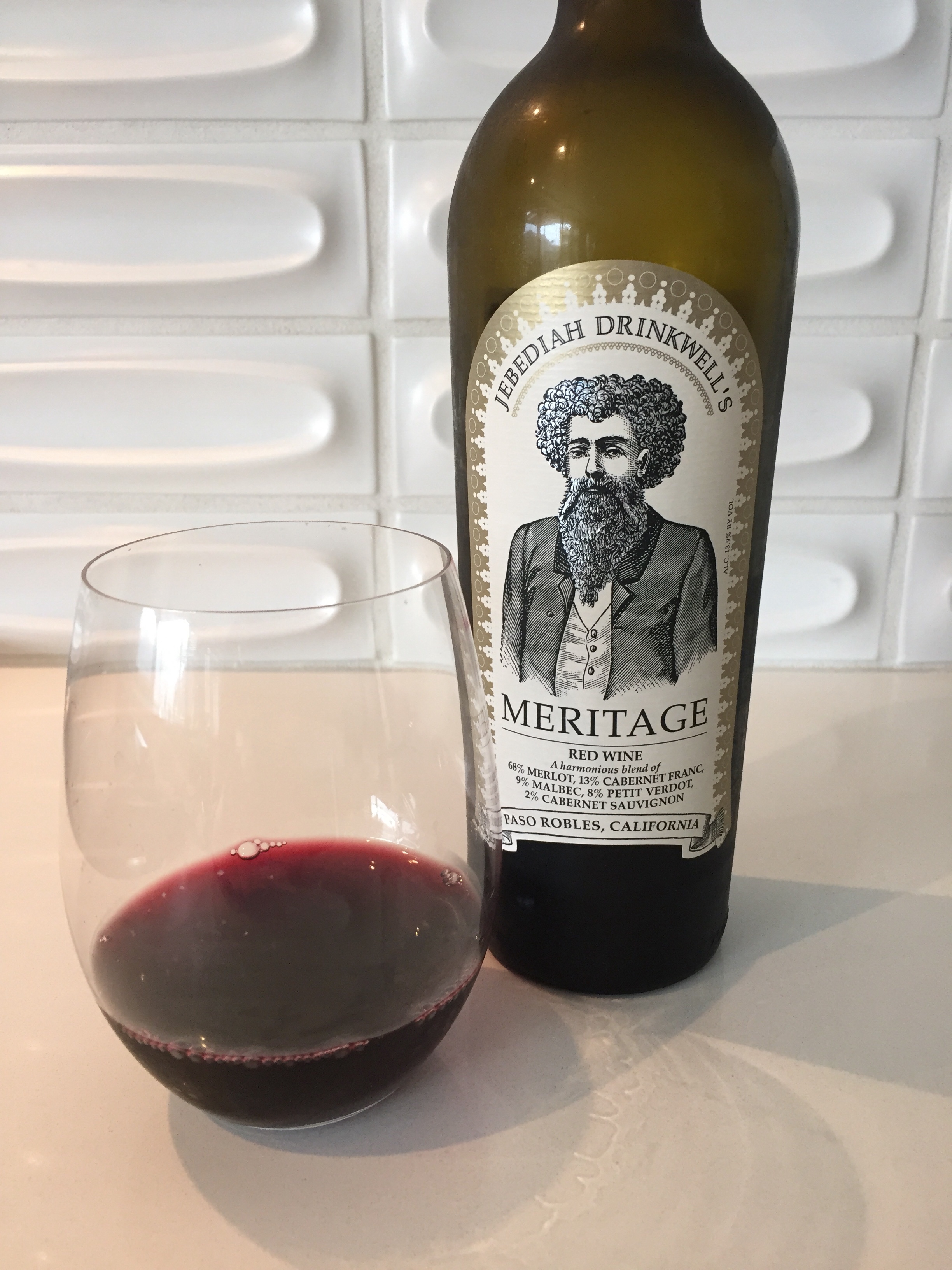 I have to admit that I had pretty low expectations for this wine based solely on its price point of $5.99.  So it languished in my wine cellar for weeks. Maybe that was a good thing.  You see, when wine is jostled (during the processes of bottling and transportation) it often results in it getting a mild case of what is known as “bottle shock”.  So the rest might have done this bottle good.

There were two things that attracted me to this wine:

What didn’t attract me was the label.  I guess I am as susceptible to the “curb appeal” of a wine as anyone.  I just didn’t find the monochromatic drawing of “Jeb” appealing…

All that said, I revisited the wine last night when looking for an inexpensive weekday wine to enjoy before – and with – dinner.  I was immediately struck by what an extraordinary value this wine is. It has nice structure compliments of some time spent in oak.  Its firm tannins were balanced nicely with fruit flavors of red plum and blueberries.

Many red wines at this price point are pretty pedestrian. (Did I just overdo it on the alliteration there?)  This one was a pleasant surprise.

Another surprise was discovering that this wine is non-vintage (NV) which I didn’t notice until after enjoying a glass  and was photographing the bottle. Perhaps this was just as well, as it likely would have prejudiced my assessment, and not in a good way.  That’s the reason that wines in competitions are tasted blind, to prevent the injection of bias from things other than the wine itself.

But sometimes not needing to declare a vintage is a good thing.  It gives the winemaker a lot more flexibility when it comes to blending, but it comes at a steep price.  Let’s say your winery has three vintages of red wines from 2014, 2015 and 2016.  They are all perfectly sound, delicious even, but when you blend them together, they must be sold as NV, which depresses their price at retail.  Not good if you are the winery.  But potentially very good if you are a wine consumer. Wine buyers in the trade typically “look down their noses” at wines without a vintage.  Thankfully, not the buyers at Trader Joe’s.

Most $5.99 red wines (and many of whites for that matter) that sell well under $10, are a bit “fake”.  They don’t taste bad, per se, just a bit…disingenuous.  They tend to be flabby, soft and unremarkable.  The shortcomings of the wine itself are masked by any number of additives that enhance color, flavor and mouthfeel.  It takes some real attention to identify the presence of these enhancements.  I am happy to report that I didn’t detect any manipulation via additives in this bottling.

Also, most wines that sell at this price point carry the underwhelming appellation of merely “California”, which is why “Paso Robles” caused me to do a double take.

Speaking of California, the word Meritage was invented here.  And to use the trademarked term, a winery must subscribe to the Meritage Association, which is comprised almost exclusively of California wineries.  While there is such a thing as white Meritage, they are far less common than red ones.  The reds must be produced using the only the same five red grape varieties employed by winemakers “across the pond” in Bordeaux, France.  You can see these five (Merlot, Cabernet Franc, Malbec, Petit Verdot and Cabernet Sauvignon) and their percentage of the blend in the front label photo above.

The back label is entertaining, even if the rhymes (coupling “Malbec” with “wholly bless” for example) are a bit clunky: 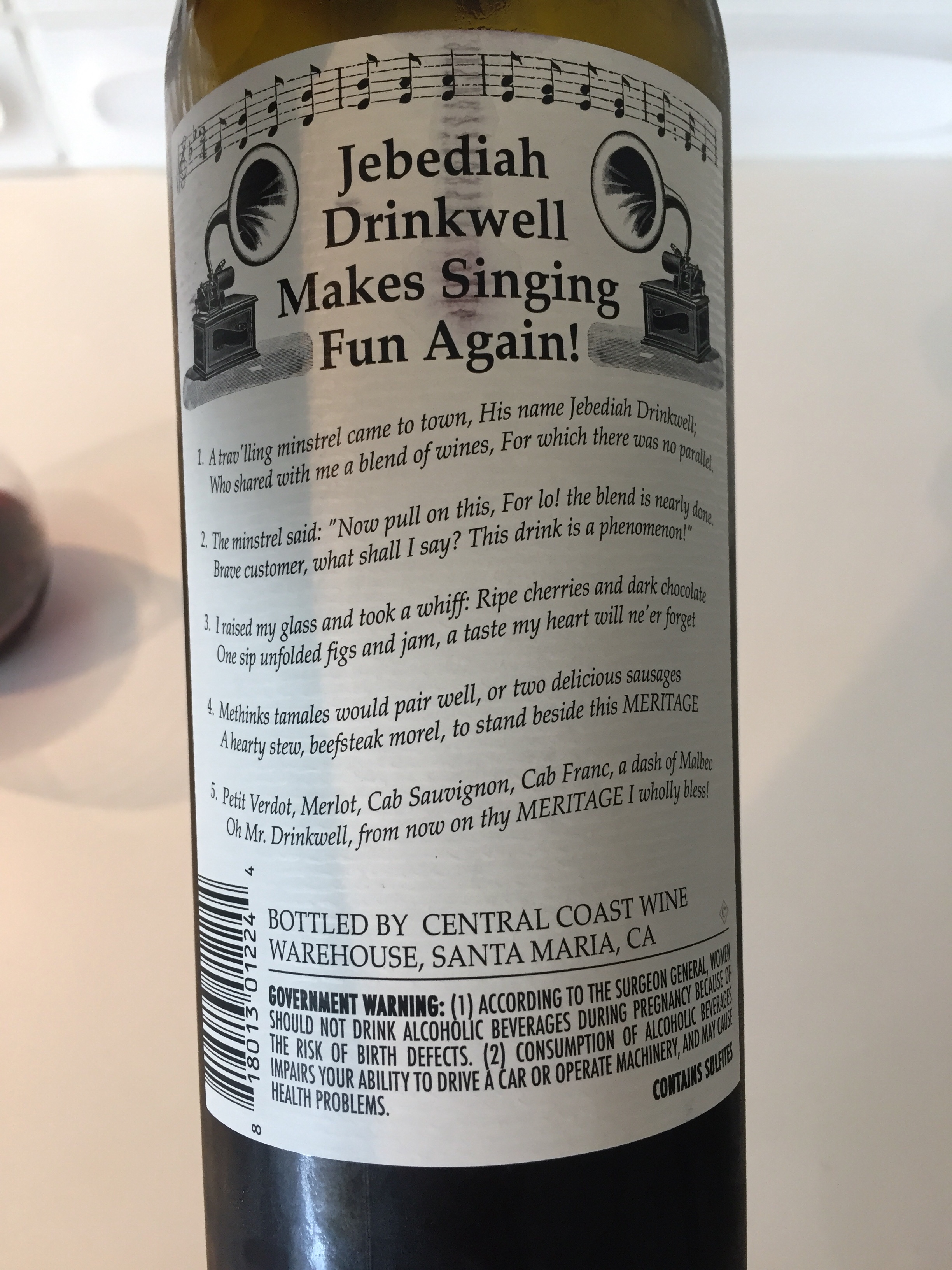 That said, let me bust out a rhyme of my own:

Looking for a red

That can’t be beat?

With some roasted meat?

Get to TJs, but