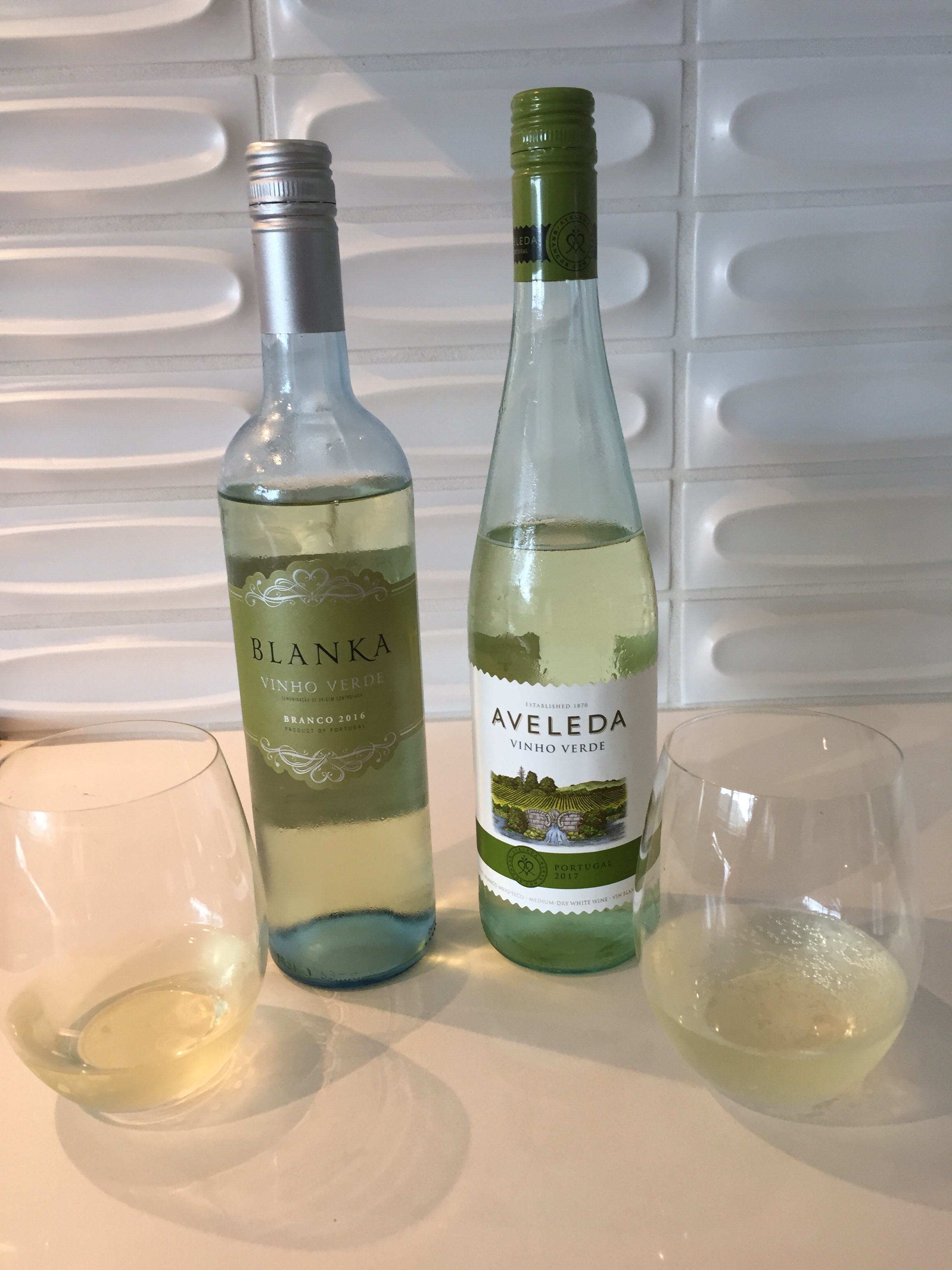 A few years ago, my wife and visited Portugal on a wine buying excursion. On our way to the wine regions of the Douro Valley, we meandered between the small towns that dot the coastline between Lisbon and Oporto.  We sustained ourselves on spectacularly fresh seafood (the giant prawns were especially memorable) and washed our meals down with bottles of crisp, refreshing (and subtly fizzy!) white Vinho Verde.

Since these wines are not terribly familiar to most American wine consumers, let’s start with some basics.  Vinho Verde refers to a place (a D.O.C. or appellation in Northwest Portugal) as opposed to a grape. While it literally translates to “green wine” half of the wines from the area are made from red wine grapes. That said, most wines imported into the U.S. from Vinho Verde are white – and simple.  These are not wines for studious contemplation. These are wines for quaffing!

One of the things that make these wines so “quaffable” are their low alcohol levels.  Most California table wines hover between 13.5 and 15% alcohol by volume (ABV, for short).  By contrast, the wines of Vinho Verde, by law, can not exceed 11.5% ABV.  These two bottlings both had only 9.5% alcohol.  That is roughly one-third LESS alcohol than most table wines.  (We discovered first hand in Lisbon that this does NOT mean you should drink two bottles, especially if the first is on an empty stomach while you are waiting for dinner to arrive!)

With summer just around the corner here in the Northern Hemishpere, I thought it was a good time to seek out some renditions of Vinhos Verdes here on the left coast, where wines of European provenance are noticeably more rare than in those parts of the country east of the Rocky Mountains.  Yet I found a smattering at my local Total Wines & More store, and brought three home for a comparative tasting.  One of the three got disqualified when I discovered that its label did not show a vintage.  Vinhos Verdes are made to be drunk while young, while they retain their fruit and freshness. It’s difficult to know how old a bottling is without the benefit of knowing the vintage.

But knowing the vintage is just a start, and it doesn’t ensure that you won’t end up with a bottle that you wish you hadn’t brought home. It’s a bit like a bad date…one of these two was a bad date.

The store signage for the Blanka Vinho Verde promised it would be “fresh and exuberant with zesty aromas of of lemon and lime and notes of green apple and minerality.”  Ironically, this description of the Blanka, although it did NOT match what I tasted in the glass (which was an oxidized, funky mess) was a pretty spot-on description of the Aveleda. Once the latter opened up, it was a really nice example of how good a white Vinho Verde can be when served young, and served cold. I found it a bit like a wine version of Sprite or the more obscure soda pop flavor, Fresca, one of my childhood faves.

In fact, the light effervescence in these Vinhos Verdes is actually the result of CO2 being injected into the wine, not unlike how it is done with soft drinks.  But the difference is that in these wines the level of carbonation is significantly less, so much so that you barely notice it.

So the bottom line on these two wines is that – as is so often is the case in our head to head tastings –  the less expensive one (the Aveleda at $8.99) is the better of the two.

Lastly, it is interesting that despite being from the same appellation, these two producers elected to use different bottle shapes.  The shape for the Blanka is what is known as a Bordeaux shaped bottle, which features what we wine geeks refer to as high shoulders. The Aveleda bottle, on the other hand, has what is referred to as “sloped shoulders.”  Conventional wisdom is that more “masculine” wines (think Napa Cabs, Australian Shiraz, Argentinian Malbec, etc.) go into bottles with high, squared shoulders whereas more “feminine” wines (Pinot Noir and Chardonnay, for example) are marketed in bottles with sloped shoulders. Perhaps to reflect the fact that stylistically this wine has something in common with its German peers, it is marketed in a more narrow glass vessel akin to a German style one.

But in the final analysis, it’s not about the glass. It’s about what’s inside!