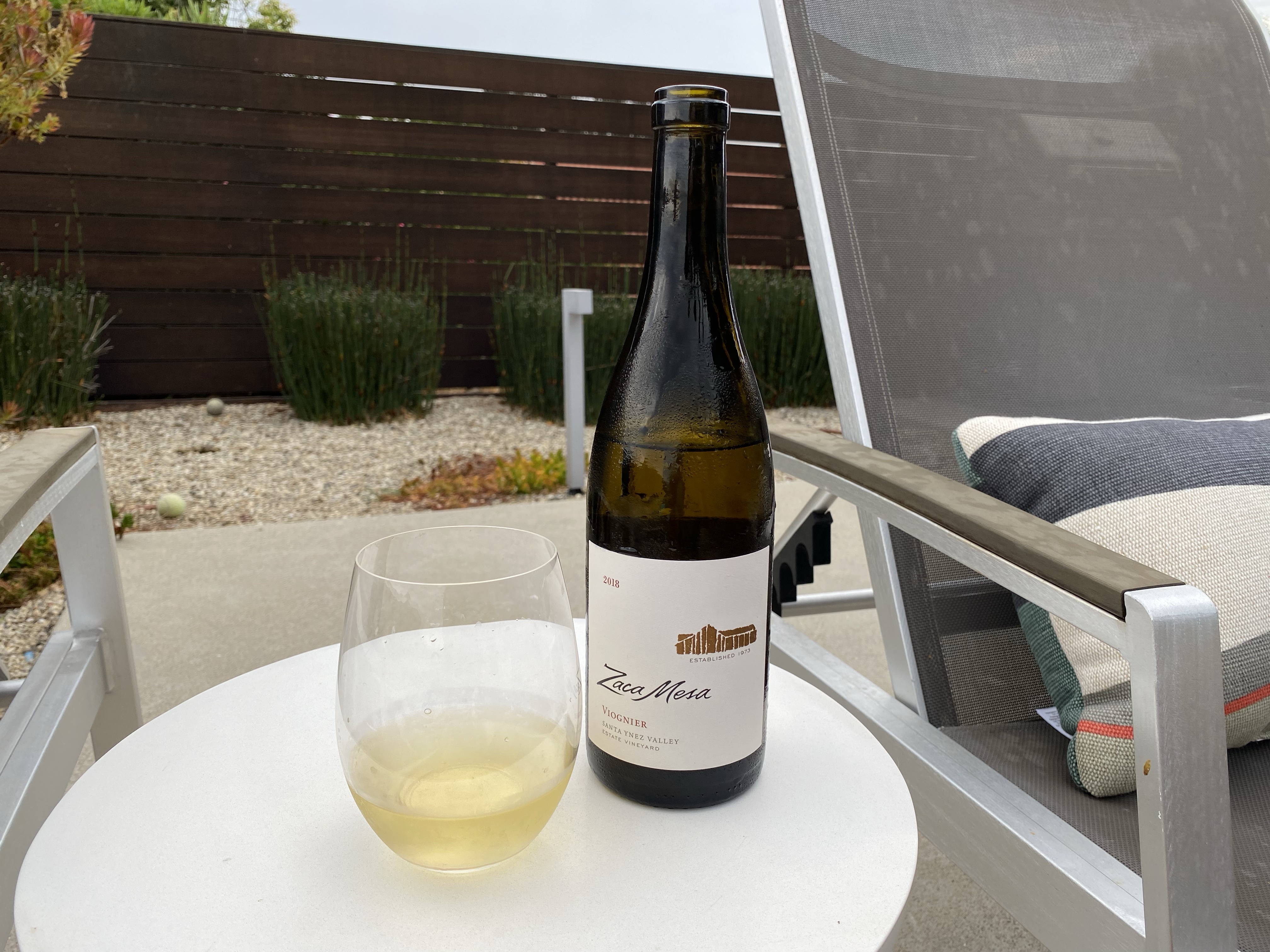 Being less than an hour away, Santa Barbara County (which includes the Santa Ynez Valley AVA) is our “local” wine region. So we were pretty excited to find this 90 point (Galloni and Wine Enthusiast) 2018 Zaca Mesa Viognier in the bins at our local Costco.

The unique, transverse nature of the valleys of Santa Barbara Wine Country provide a patchwork quilt of micro-climates and terrains, resulting in one of the most diverse grape growing regions in the world. The valleys run an unusual east-west rather than north-south. West of the 101 freeway (where the Santa Rita Hills AVA resides) the region is world famous for its Pinot Noir and Chardonnay bottlings.  In the warmer areas to the east, Rhone varieties dominate. Viognier is such a grape, as is Syrah. Zaca Mesa has earned its reputation in no small part due to the Syrah grape.

This 2018 Viognier commands your attention from the moment the cork is popped. The bouquet is compelling — expressive with varietal notes of white flowers, nectarine, orange blossom and wet stone. At first sip, peach and honeysuckle flavors dominate the palate, slowly giving way to the mouthwatering acidity that lingers with vibrant grapefruit and mandarin orange. Finishes long with bright acidity and lingering minerality and begs for another sip.

Established in 1973, Zaca Mesa is a family-owned winery that crafts wines from its “estate” vineyards. This designation, which appears on the label of this wine, means that the winery owns and/or farms the vineyards the grapes are sourced from. It is a pretty good clue that the wine is something special.  And at $12.99 (it is twice this price on the winery’s website) it is extra special.

Zaca Mesa Winery & Vineyards was founded in 1973 by John Cushman and five friends, who purchased the property the year prior. As the third winery establishedin Santa Barbara County, experimentation was an integral part of Zaca Mesa’s early days. Several different varieties were planted to see which grapes would be the best suited to the estate’s unique terroir. After many trials, Zaca Mesa’s first winemaker, Ken Brown, planted Syrah in 1978, establishing Zaca Mesa as the first to plant Syrah in Santa Barbara County. This block of Syrah remains the oldest Syrah block on the Central Coast and is now known as the Black Bear Block. Ten acres at Zaca Mesa are planted to Viognier – thankfully. Says the winery: Viognier is a beautifully expressive grape that is perfectly suited for our high elevation vineyard site.

As a pioneer in Santa Barbara County, Zaca Mesa has been a training ground for many great winemakers, earning the moniker “Zaca University”.

About the Viognier grape:

I don’t understand why Viognier is not more familiar, and more popular, among American wine drinkers. It is one of my Top 5 white white varietals – maybe top 3 even – FWIW.  Perhaps it’s because people don’t know how to pronounce it. Let us help with that, it is pronounced: Vee-On-Yay.  The emphasis is on the last syllable. It is a remarkably versatile food wine, and is one of those rare whites that pairs nicely with hard to pair cuisines like Chinese, Thai and Indian food.

Viognier is a white grape variety indigenous to the Rhône Valley of France.