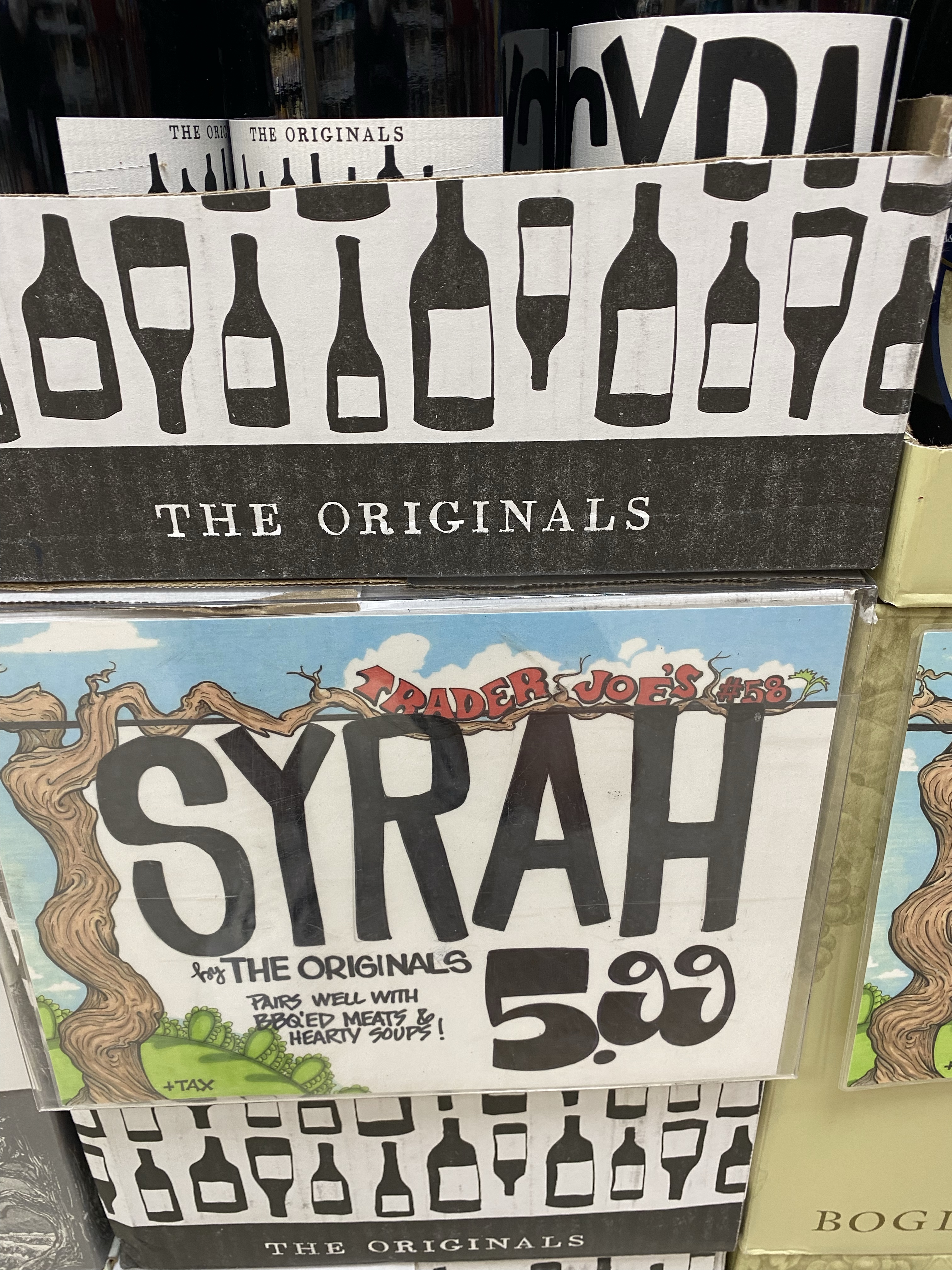 Before we start waxing about the grape, the vinification, the history…let’s say this: this is a great bottle of wine for $5.99!

I entered the wine business – at least as a professional, hehe – in the early nineties.  It was a time when Merlot was having a moment.  It was the go-to when you were going to have a casual glass – or bottle – of red wine. Heck, it was synonymous with red wine.  (Then along came the film Sideways, but I digress.)

By contrast, let’s consider Syrah.  Back in the early 90’s there was almost none of it (164 acres to be precise) planted in California. But growers took note of its critical popularity (from producers in Australia, especially) and thought that it could be the next Merlot, but with a higher price tag. Heck, it had an easy to pronounce name which was as sexy as “Mair-Low”.  Voila, a decade later there were over 10,000 acres planted in the Golden State.  Everyone seemed to be betting on Syrah as the next big thing. Problem was, most California vintners tried to make it a surrogate for Merlot, as opposed to letting its “freak flag fly” the way they do in the Northern Rhone region of France.

The French vintners in the northern Rhone have had generations to master wines made from this grape. But their wines do not emphasize the juicy fruit flavors, but rather aim for an expression of savory aromas and flavors of olives and herbs, bacon and minerals, flowers and spices, blood and earth.  In a word, terroir. There have been vintners here in California that have masterfully emulated this Rhone style of wine using the Syrah grape, but they have been more of the exception than the norm.  It seems as the best “Franco-American” expressions of Syrah come from cooler climate regions of the U.S.  So it should come as no surprise that there are some really great renditions coming out of Washington State. Think “Washington state” and you’d be forgiven if your mind’s first connection is with Cabernet Sauvignon and Riesling. After all, Syrah, accounts for only 24,000 tons of Washington’s 261,000-ton output, with Cabernet Sauvignon dominating at 74,000 tons.

Fact is, few American winemaking areas can rival Washington state when it comes to diversity, as demonstrated by the breadth of styles among its Syrahs.

This is a good one!

With captivating aromas of black olives, laurel and minerals, the direct connection to the northern Rhone is clear. On the palate, this wine is medium bodied, extremely well-balanced, smooth, and elegant. The flavor profile is a delicious ripe boysenberry, iron and minerality with a touch of ripe blackberry and black pepper mixed in. Equally juicy plum, black fruit on the tongue followed with chocolate. Low tannin and easy drinking. Would pair really well with roasted meats, stews, and vegetarian dishes leaning on cheese.

If your search for this wine lands you in Trader Joe’s, take along our handy Lucky 13 list of TJ’s wine here.

And if your wine shopping excursions land you in Costco, prepare by grazing our most recent reviews of Costco wines here in our Lucky 13 list.