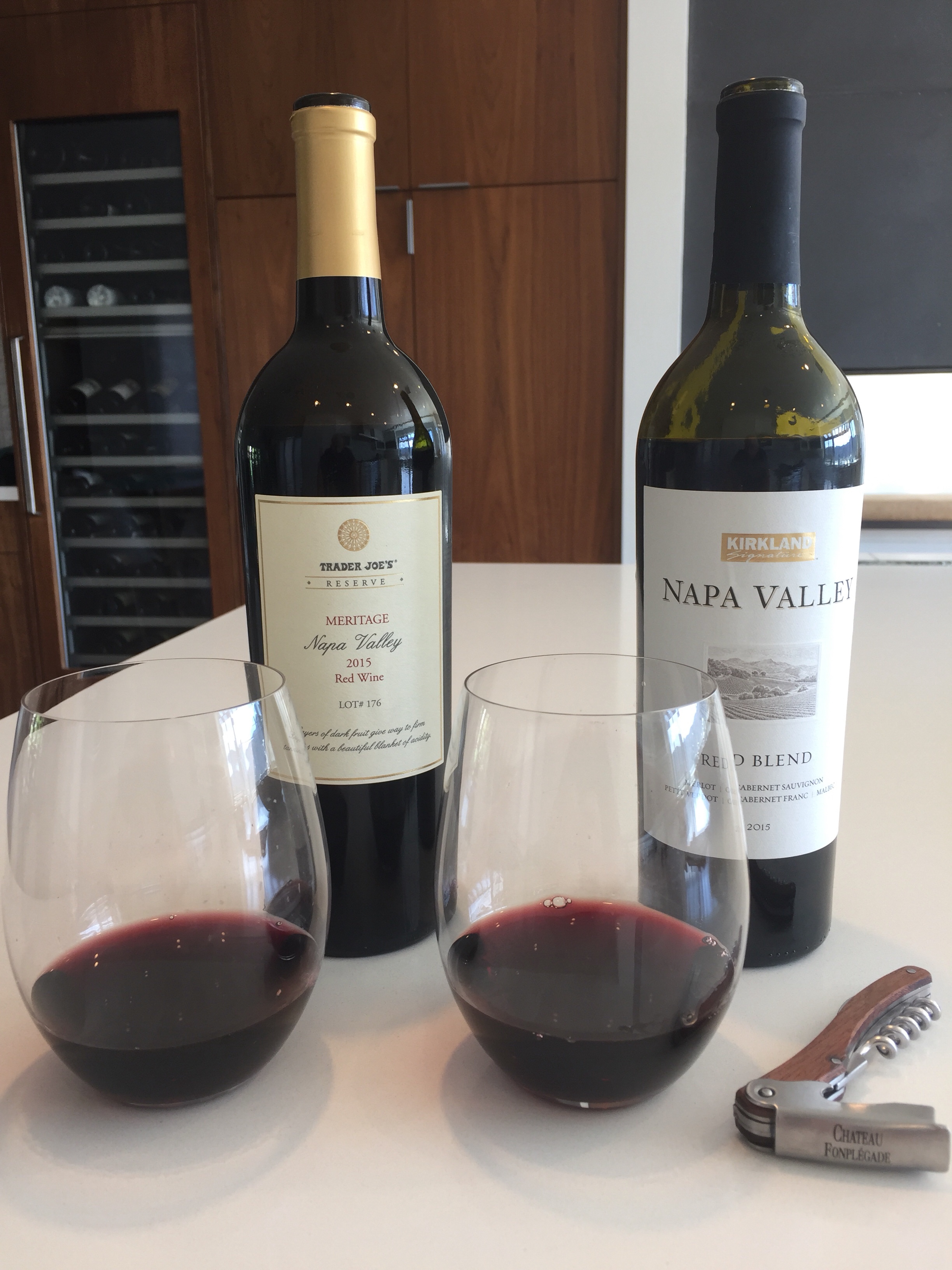 What’s in a name?

Let’s start the difference between a Meritage and a “Red Blend”.  A Meritage is always a red blend, but a red blend is not always a Meritage.  Still with me?

A red Meritage (I am told that mythical white Meritage does exist in the wild, like unicorns) must be produced using the only the same five red grape varieties (Merlot, Cabernet Franc, Malbec, Petit Verdot and Cabernet Sauvignon) employed by winemakers “across the pond” in Bordeaux, France.  Thus, they are sometimes also called a Bordeaux blend. Still, still with me?

So what I am trying to impart here is that if a wine consists of a blend of the five aforementioned wine varietals, whether it is labeled a Meritage, Red Blend or Bordeaux Blend is really a marketing decision. It’s made of the same stuff.

All that said, while perusing my local wine sections, these two wines caught my eye because they had so much in common:

It just so happens that one is from Trader Joe’s, and the other one from up the street at Costco.

To be honest, I half expected these to be the same wines under different labels.  I have been in and around the private label wine business for going on three decades, so this would not surprise me.

But I don’t think they are the same wine.  They are close, but there are some tell tale differences once you pour and taste them.

In a nutshell, the flavors and aromatics of the two are very different.  The Meritage from Trader Joe’s is a little lighter and juicier. With its flavors of cherry cola, it didn’t hook me right out of the bottle. But after it sat for a while it changed and became more complex. Flavors of cappuccino, cocoa, vanilla and tobacco emerged and seduced.

The Costco red blend was a bit more structured and muscular.  Some would call it “bigger.” Even though the label says it’s two-thirds Merlot, it drinks more like a Cabernet.  It could be that the Petit Verdot and Cab Sauv ganged up on the Merlot and pummeled it with their tannins.  Beyond the moderate and velvety tannins, the wine is fruit-driven with aromas and flavors of plum, raspberries, and black cherry.

Both wines are really well put together, and exceedingly good values. For my money, I prefer the Costco Red Blend at $10.99.  But my friend Moshe – who has also tasted both – came down on the side of the Trader Joe’s Meritage.

As I say so often when it comes to picking favorites, it often comes down to personal preference. But it also comes down to mood, weather, and what’s for dinner.  Which ever one you decide to pull the cork on, you’re in for some good sipping.